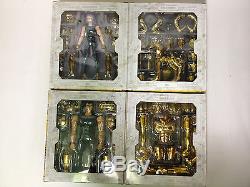 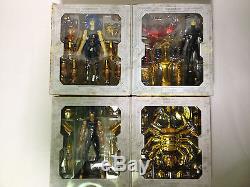 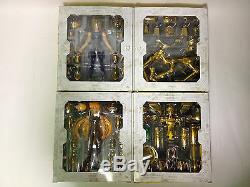 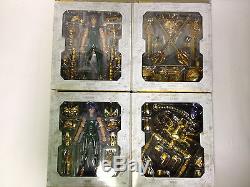 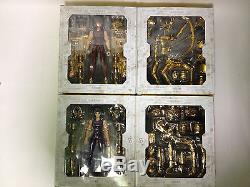 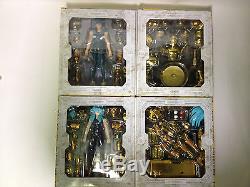 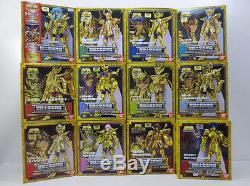 Saint Seiya Cloth Myth Gold saint Fullset (12 items) figure. When devious vice is rampant in this world, they are the fighter of hope who will definitely appear. Legend has it that their punch splits the sky and their kick breaks the earth.

They serve to goddess Athena from the time of the myth and fight against an enemy by a bare hand for Athena who doesn't like a weapon. And saint makes the constellation of 88 where they shine in the sky defence, and they wears the armor called "Cloth" which modeled on the defence constellation. To beat the Pope who betrays Athena and tries to kill her, Bronze saints who serve Saori who is the reincarnation of Athena board the sacred precinct in Greek.

But as soon as they arrived at a sacred precinct, the gold arrow which Ptolemy threw sticked in the chest of Atena "Saori", and she fell down. Bronze saints knew that it's only a Pope who the gold arrow can be removed. And they try to reach the rooms of Pope where is at the top of the zodiac. But gold saints who has attained the peak in 88 constellations and is strongest saint stand up against the head way of bronze saints...

This figure of gold saints which protects the zodiac is commercialized by Saint Cloth Myth series. The best thing of all, The point of Saint Cloth Myth series is modeling and texture of Cloth. It's also wonderful that the design of Masami Kurumada who is an author was perfect, but technical capabilities of BANDAI which made that 3-dimensional perfectly is also great. An original story is reproduced faithfully, so it is possible to make them load on an element assembly as Cloth, and to dismantle an element assembly and make it an art object.

Modeling which reproduced an original story faithfully is also wonderful, but a blaze of Cloth reproduced by the metallic painting is very beautiful. Modeling of Saints's face is also excellent. All of the character is really very similar. Suffice it to say that, Weakness is what it takes time for assembly. A balance is bad, so independence is a difficult thing.

However, The concept of an original story is reproduced faithfully, and modeling and painting are almost perfect. I recommend you strongly, because this article is highly complete.

I will surely send you. We shall not be responsible for any mishandling, damages or delays caused by the postal service as these are simply out of our control. We likewise will leave you a glowing feedback immediately.

We will deliver various Japanese items of the original, For feeling something familiar to japan culture by a fair price. We attach great importance to the relationship with our customer. Relationship calls "kizuna" in Japan. We will do our best to satisfy your needs. We hope that you like Japanese culture more than now.

These charges are the buyers responsibility. We do not mark merchandise values below value or mark items as gifts - US and International government regulations prohibit such behavior. The item "Saint Seiya Cloth Myth Gold saint Fullset (12 items) action figure" is in sale since Saturday, February 13, 2016.

This item is in the category "Collectibles\Animation Art & Characters\Japanese, Anime\Saint Seiya". The seller is "neeton2013" and is located in Osaka, Japan.